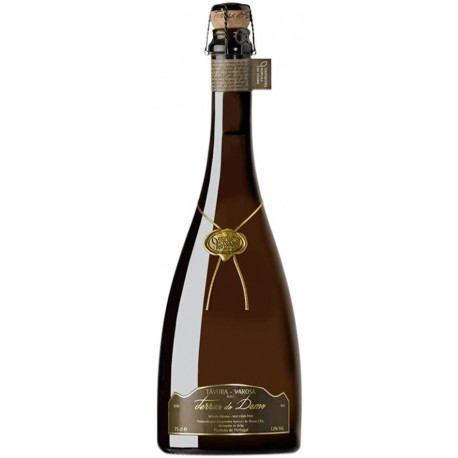 Terras do Demo Brut is an outstanding Portuguese Sparkling Wine and its as good, as any great champagne. It presents a pale soft straw colour and It's fruity, with an attractive almond and toast edge that suggests this bottle has been aged for some age. The acidity and crisp texture make it fresh and ready to drink with a balanced acidity at the end.

Terras do Demo Brut is an fantastic sparkling wine from the demarcated region of Távora-Varosa, in Beira Alta, the oldest demarcated region of Sparkling Wine in Portugal, spread over 3500 hectares of land, distributed in eight municipalities - Tarouca, Lamego, Sernancelhe, Moimenta da Beira, Penedono, Tabuaço, São João da Pesqueira and Armamar. It's in this Region that the Cooperativa Agrícola de Távora brings together, with the approximately 1350 associated farmers, the grapes that give rise to this Terras do Demo Brut. The Távora-Varosa Region might not be the most productive region of Portugal, but it's the region that produces more sparkling wine with the denomination of origin and quality assurance.

Tasting Notes:
Terras do Demo Brut looks like a perfect champagne. It starts with an impressive lively mousse. It is intensely rich, dense and still young, with a soft background to the ripe citrus fruits that are cut with a subtle acidity of mandarin. It worths every sip of this great fresh and long lasting sparkling wine.

Very very delicious sparkling wine with a perfect dry almond crisp and lovely lasting acidity.
It easy rates a good Champagne though the french might have an other opinion I think it's a scoop for a very reasonable price.