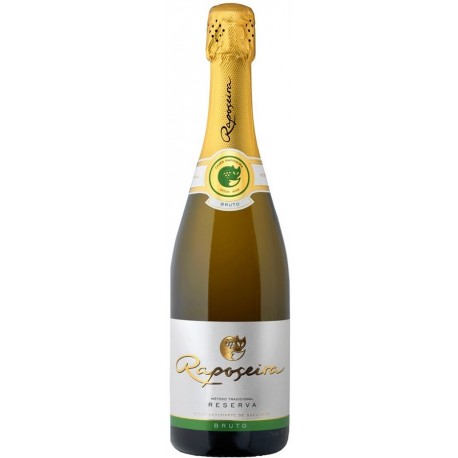 Raposeira Reserva is like an authentic tasty Champagne. This wonderful sparkling wine sustains a beautiful citrine colour and a very smooth aroma with notes of vanilla which give a fresh and unique flavour.

It was in 2002 that Orlando Lourenço, then the administrator, and enologist of the Murganheira's company, decided together with his partners to acquire the Pernot-Ricard's company the Raposeira. Orlando Lourenço met in 1986 a well-known Champagne expert, George Hardy, who taught him the meticulous process of Champagne production. It was using the method of production of champagne for the production of the quality sparkling wines that the sparkling wines of the Raposeira evolved until its recognition like the leader of sales in the market in Portugal. Born in Lamego, Orlando Lourenço could not fail to have connections to the most emblematic company of his native land, Caves Raposeira, founded in 1898 by the Teixeira Vale family. His father, who was the caretaker of the vineyards, had half of the production as his labor remuneration at Quinta de Passariz, owned by the godfather of Orlando Lourenço, who was one of Raposeira's oldest suppliers. The management of the Murganheira / Raposeira group was always guided by the reinvestment of profits, so the tiny Agricultural and Commercial Society of Varosa, which sold forty thousand bottles in 1986, now sells 1.8 million bottles of Raposeira and 1.1 million bottles of Murganheira.

Tasting Notes:
Raposeira Reserva Brut has a bright yellow color. This wonderful sparkling wine has fine bubbles and it's refined. The aromas are led by the macerated fruit pears, freshly cut herbs, and some vanilla. It has a refreshed creamy foam and it has a lingering finish.