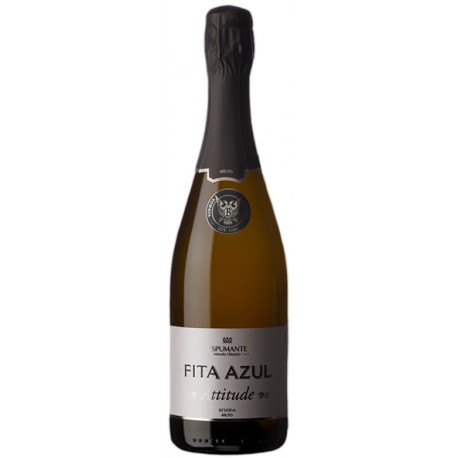 Fita Azul Attitude Reserva Brut is an impressive Portuguese Sparkling Wine. It presents a pale beautiful straw colour and it has become slightly drier over the years. It shows several quality fruits aromas as apples and lime flavours. The acidity and crisp texture make it immediately attractive. Light and fruity at the end, it is a good apéritif wine.

The Fita Azul Sparkling Wines are produced according to the Classic Method (imported from the Champagne Region of France). The choice of base wine is a focal point for the production of the differents sparkling wines since different profiles require different base wines. The grapes that give origin to the Fita Azul are usually harvested between the months of August and September when the ideal levels of maturation are verified. The desired characteristics in a base wine are the relatively low alcohol content and the relatively high acidity. The vinification begins with the total destemming of the grapes, which are gently pressed using only the must. A static decantation takes place in the cold for 24 hours, after which the wort is separated from the lees. The fermentation begins at a controlled temperature, at 16ºC. After the end of the alcoholic fermentation, the wine stems on the fine lees for 2 months. Before bottling, the wine undergoes a process of protein and tartaric stabilization and is then subjected to various filtrations in order to eliminate microorganisms and improve their clarity. In the large vats, where the base wine for the sparkling wine is found, it is time to add the tirage liquor. The wine is placed in bottles that are sealed with a vulgar capsule, being thus ready to go to a stage in cellars, without light, without currents of air and with constant temperature (12º to 15 ºC). It is in these cellars that the second bottle fermentation takes place (in a closed environment), characteristic of the Classic Method of production of sparkling wine. This second fermentation in the bottle, like all fermentations, causes carbon dioxide which, being unable to escape, is entirely dissolved in the base wine. The wine is "Sparkling". The longer the fermentation time and the integration of the gas into the base wine, the better the quality, the intensity and the duration of the bubble. The stage time (time from bottling to degorgement) of the Fita AzulSparkling Wine is carried out in the cellars at controlled temperatures and is decisive for its final quality. This is the maturation time on the lees which plays an important role in the quality of the foam and the taste of the final product. It is at this time that the autolysis of the yeasts is given that contributes to the complexity and enrichment of the aroma. Originally most of the base wines have aromas based on fruity and floral notes. As the stage progresses, the aroma of the sparkling wine is modified by giving rise to buttery notes, biscuits, nuts, etc. The Reserva count for at least one year of bottle, the Super Reserva for at least two years, while the Velha Reserva have fallen asleep in the dark cellars for more than three years.

Tasting Notes:
Fita Azul Attitude Reserva Brut is a splendid sparkling wine that shows a great acidity and a fresh aroma. It is as crisp as it is eclectic and the apple and lemon aromas that dominate the flavors stand out, with only a slight touch of softness to calm the acidity.