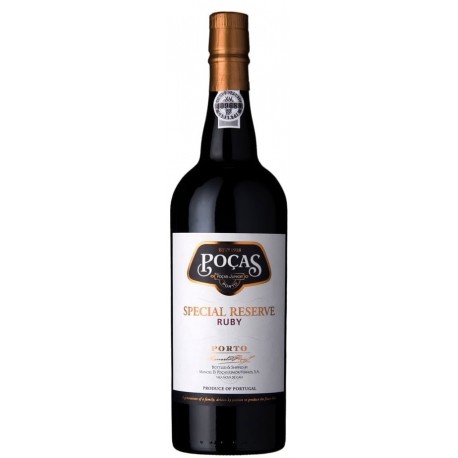 Pocas Special Reserve is an elegant and polished ruby Port wine with aromas of ripe red fruits, notes of spices, cinnamon and vanilla and has a well-balanced acidity.

Winemaking:
Pocas Special Reserve is a Ruby Port wine produced from autochthonous red grapes varieties such as Touriga Nacional, Touriga Franca, Tinta Roriz, Tinta Barroca, and Tinto Cão. The grapes were foot trodden in granitic Lagares and after a long maceration, the fermentation process took place at controlled temperatures. When the wine had achieved the sweetness desired the wine spirit (Aguardente), was added to stop the fermentation. The wine was then transferred to oak vats where it has stayed for an average period of 4-5 years old, prior to being bottled.

Tasting Notes:
Pocas Special Reserve is a Ruby Port wine robust and fresh which exhibits well-ripened red fruit aromas, some nuances of spices like cinnamon and vanilla and persistent and open acidity.