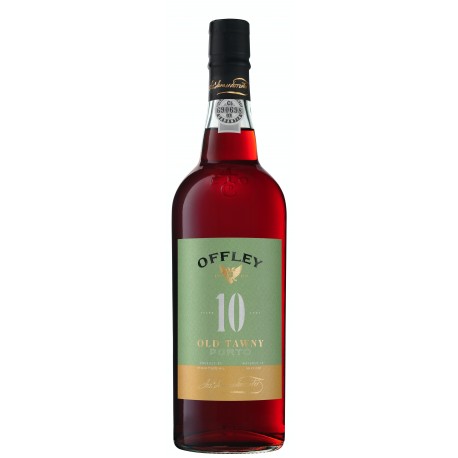 Offley Porto 10-Year-Old has an intense Tawny colour with brick-like tones. It's elegant and his complex bouquet is characterised by flavours of ripe fruit, marmalade and nuts, with notes of vanilla, raisins and jelly. In the mouth, the balance between the richness of the grapes´ natural sugars and its tannins provide the wine with a fine structure and a delicate yet complex finish.

Offley’s history goes back to 1737, year in which the Englishman William Offley founded the company to which he gave his own name the Offley Porto's House. Offley Port's House has begun importing and bottling Port's Wine to the UK by 1787 and it was described as one of the most considerable English houses at Porto.It is however from the 19th century onwards, the company acquired a new dynamism. In 1831, Joseph James Forrester, a nephew of the founder, joined the company. An academic and an artist, James Forrester was the first person to map the River Douro and its region, as well as to draw maps that became works of reference. He also undertook numerous wine-growing studies and left important graphical works – paintings, drawings and sketches – in which he shows all his passion for the Douro. James Forrester’s contribution to the development of the region where Port Wine is made, as well as to its trade, earned him the title of Baron given to him by the King of Portugal. Throughout the years the company invested in the production and marketing of fortified wines, in the planting of new vineyards and in the re-planting of existing ones (as happened at Quinta da Boavista), built and maintained unique ageing cellars at Vila Nova de Gaia.

Winemaking:
Offley 10-Year-Old is produced by the traditional Tawny Port method. The hand-picked grapes are destemmed and crushed before fermentation at controlled temperatures, with skin maceration to extract tannin, colour and flavour. The addition of grape spirit at the ideal moment sets the balance between the wine's sweetness and bouquet. The moment of fortification is chosen by the winemaker following strict control of fermentation temperatures and densities according to the vine variety, maturation stage and the final sweetness required. After the harvest, the wines remain in the Douro until the following spring, when they are taken to Vila Nova de Gaia and enter Offley’s centuries-old lodges for ageing in oak wood casks. The final blend results from a selection of wines between 9 and 12 years of age, composed to maintain the consistency and character of this Offley 10-Year-Old Tawny Port.

Tasting Notes:
Offley 10-Year-Old Tawny Port has a dark, still-young colour. Freshness brings out bright red and dried fruits as well as acidity. It's attractive, soft and fruity, a young-tasting 10-Year-Old with notes of vanilla, raisins and jelly. In the mouth, the balance between the richness of the grapes´ natural sugars and its tannins provide the wine with a fine structure and a delicate yet complex finish.