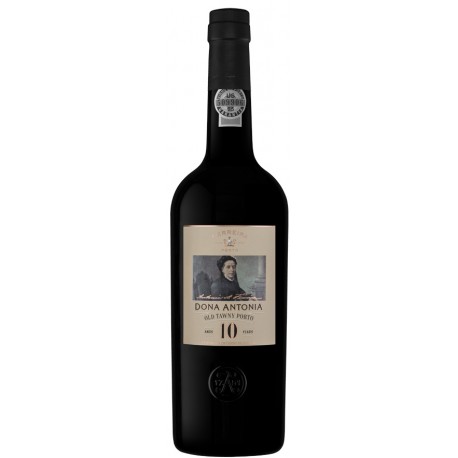 Ferreira Porto 10 year old presents a sharp burgundy brick tawny colour. The aroma is characterised by a balance between the quality of grapes and its ageing through oxidation in wood. In the mouth, the classic and fresh style of Ferreira achieves a balance between the different sensations in the wine body and a final persistence in the mouth.

The name Ferreira is known in the world of Port Wines and Douro Wines as a brand that produces wines of great quality since 1751. The origin of the foundations of the company Ferreira is the result of the actions of the two brothers Ferreira, José Bernardo and António Bernardo. In the early nineteenth century, when they acquired a vast amount of land that they added, considerably, to the land inherited from their parents. The marriage between his descendants, the cousins António Bernardo II and Antónia Adelaide, would consolidate, in the next generation, a unique patrimony and would indelibly mark the future of Ferreira. Twice widowed, Dona Antónia did not limit herself to managing an inheritance. She took over the business at age 33, strengthening and expanding it thanks to her entrepreneurial spirit and her charisma. It is still remembered in Portugal for its business ethics and as an example of good practice. Endowed with exceptional energy and a rare commercial talent, it gave a great boost to viticulture in the Douro and was known for its acts of social welfare in the region. His intelligence and goodness gave him the warm admiration of his contemporaries, who affectionately called him "Ferreirinha". Today, more than 250 years later, Ferreira is the Portuguese brand, reference in excellent wines of Porto and Douro, a symbol of a country and a culture that proudly honours.

Winemaking:
Ferreira 10 year old was produced by the traditional tTawny Port method. The hand-picked grapes are destemmed and crushed before fermentation at controlled temperatures, with skin maceration. The addition of grape spirit at the ideal moment sets the balance between the wine's sweetness and the bouquet. After the harvest, the wines remain in the Douro until the following spring, when they are taken to Vila Nova de Gaia and enter Ferreira’s centuries-old lodges for ageing in oak wood casks. The final blend results from a selection of wines between 9 and 12 years of age, composed to maintain the consistency and character of this Ferreira 10 year old tawny Port.

Tasting Notes:
Ferreira 10 year old is an exceptional Tawny Port Wine, a symbol of the excellence of the Ferreira brand´s style in creating old Tawny Port's Wines. Its classic profile, of great elegance and complexity with great freshness, is unique and altogether one of the most acknowledged and celebrated wines in the world.